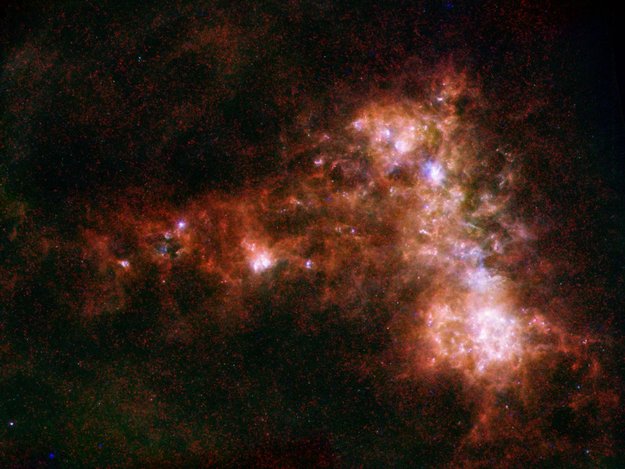 Arp 187 is one of the fading active galactic nuclei (AGN), whose AGN activity is currently decreasing in luminosity, and is a good laboratory to obtain the crucial information on the accretion disk physics and the lifetime of AGN. We investigate the observational signatures of AGN in Arp 187, which trace various physical scales from less than 0.1 pc to the nearly 10 kpc, to estimate the longterm luminosity change over 10^4 years. The VLA 5 GHz, 8 GHz, and the ALMA 133 GHz images reveal bimodal jet lobes with ~5 kpc size and the absence of the central radio-core. The 6dF optical spectrum shows that Arp 187 hosts narrow line region with the estimated size of ~1 kpc, and the line strengths give the AGN luminosity of Lbol = 1.5×10^{46} erg/s. On the other hand, the current AGN activity estimated from the AGN torus emission gives the upper bound of Lbol < 2.2×10^{43} erg/s. The absence of the radio-core gives the more strict upper bound of the current AGN luminosity of Lbol < 8×10^{40} erg/s, suggesting that the central engine is already quenched. These multi-wavelength signatures indicate that Arp 187 hosts a “dying” AGN: the central engine is already dead, but the large scale AGN indicators are still observable as the remnant of the past AGN activity. The central engine has experienced the drastic luminosity decline by a factor of ~10^{3-5} fainter within ~10^4 years, which is roughly consistent with the viscous timescale of the inner part of the accretion disk within ~500 years. We also propose that those dying AGN could be found using the AGN indicators with a different physical scale such as 12 um band luminosity tracing AGN torus (R~10 pc) and the optical [O III]5007 emission line tracing narrow-line regions (R=10^{2-4} pc).